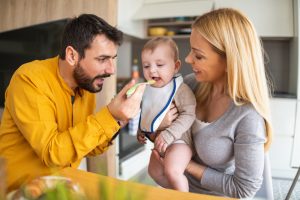 It’s no secret that cases involving children are among the most emotional and complex in family law. There are many different things parents need to think about when not living with the other parent or beginning a divorce, from how they’re going to split the family home, to how they can manage parenting and custody time.

One element which can become confusing in some cases is how the “residential custodial” parent is determined in a case when there is equal parenting time distributed between both parties.  In the custody context, the residential parent would be the one that the child lives with most (residential custody being separate and independent from “legal custody” which refers to decision making authority for the child).  Notably, in the family law world, to count as a day living with one parent or another is counted according to the place the child sleeps and then wakes up the following morning on a given occasion.  In other words, it is measured by overnights with the child.  If both parents receive the same number of overnights with the child, and the parents both look after the child in their own properties, it can be difficult to determine which is the “residential custodial” care provider.  Although I have blogged about this topic before, it is worth looking at again, as shared residential custody seems to come up in more and more of my mediations, negotiated cases and even litigated matters.

This issue can be particularly apparent in cases wherein the child custody order remains silent about which parent should be defined as the residential custodial parent. This is important because the definition of who is the custodial parent in a case will determine who may be eligible to pay child support.

I’ve worked with parents in a range of cases wherein the ability to apply for child support is crucial to the ongoing wellbeing of the residential custodial parent. In many situations, a custodial parent is not only making the transition from raising a child with another or from married life to handling bills as a single individual, but they’re also dealing with the financial complications of caring for a child on their own.

Being able to identify the custodial parent for child support is critical for the purpose of child support payment requests. In the case of Conway vs Gartmond, 144 A.D.3d 795 (2nd Dept. 2016). the courts determined the parties had equal parenting time, alternating holiday schedules and equal amounts of vacation. To determine who should be deemed eligible for paying child support payments in this case, the courts looked at the income of the two parties. Since the mother’s income far exceeded that of the father’s she was deemed “noncustodial” for support payments.  This is an important concept in New York law regarding equal residential custody.  The parent that makes more money in such a scenario is considered the non-residential custodial parent for child support purposes.  The law goes on to say that therefore the child support guidelines do apply.  While parties to this type of case may have arguments that a court could consider as to why a deviation from the guidelines is appropriate, such as that there are extraordinary costs in exercising parenting time, the starting point is that the guidelines presumptively result in the correct amount of child support.

During the course of the above referenced case, the mother petitioned for sole custody of the child and was awarded such. In 2013, the father appealed for increased visitation time which led to each parent having equal time with the child. The father then petitioned to have child support from the mother based on a change of circumstances (both parties having equal parenting time). The matter ended up in front of the Support Magistrate.

The Support Magistrate outlined the definition of the “custodial parent” according to the Child Support Standards Act. This Act dictates the custodial parent is the one that maintains physical custody of the child for the largest share of time. In a case wherein neither parent has a child for the majority of the time, the parent with the higher income will bear the greater share of the child support obligation, and should be deemed the non-custodial parent, if only for the purpose of child support.

Though initially, the father in the case above may not have been eligible for child support, as he had less visitation time than the mother, this changed when the parenting time became equal between both parties.

The Complexity of Assigning “Custodial” Roles

Over the years, various cases have drawn attention to complexities which may arise when parents share joint physical custody of a child from a child support perspective. In the case of Cazar vs Browder, 191 A.D.3d 837 (2nd Dept. 2021) a 2016 judgment of divorce provided both parents with shared “joint legal custody” of the child. Originally, physical custody was awarded to the mother, with parenting time access assigned to the father. Before the judgment of the divorce in 2015, the Supreme Court had also ordered the father to pay child support to the mother to the amount of around $900 per month.

In 2017, the father in this case moved to modify the existing agreement, to allow for equal parenting time between both parents, and to also modify his child support obligations. The court granted a parenting schedule wherein both parents had equal time looking after the child. However, the courts also ordered child support in this case to be paid by the father for a higher amount of around $1,099. When the father appealed, the 2nd department drew attention to the rule regarding higher income.

According to the 2nd Dept, the parent with the higher income should also be deemed the non-custodial parent for the purpose of child support. Since the father earned more than the mother, he was considered to be responsible for child support payments, even when the change of parenting circumstances gave him equal joint physical custody over the child.

Understanding Your Rights as a Parent

Ultimately, as Mr. Shapiro explains to his clients, the consideration of how child support should be awarded within a case of child custody must change when the “physical” custody of the child is equally split between both parents.  Sometimes, I have seen it come up that the parenting time schedule is in fact equal, but the order states that one parent is the “residential custodial” parent.  In such a situation, so long as the designation of “residential custodial parent” stands in one parent over the other, it is my belief that the law, as it is, would entitle that designated parent to child support.  Although in most cases, it is the parent with the most time looking after the child who is considered to be eligible for child support, this cannot be the case in situations with equal joint parenting time.

When a custodial parent is not made clear by the distribution of parenting time, the courts must look at the income of the spouses to determine which one may be in greatest need of assistance in the form of child support. This means the parent with the least income will usually be eligible to apply for child support – although they will not always be granted this support.  Again, arguments for deviations from the guidelines can be considered by a court.

If you have concerns about applying for child support in your divorce or child custody case, reach out to my office today to arrange an appointment at a time that works for our office and you. We can arrange a free initial consultation, up to the first thirty minutes is free.